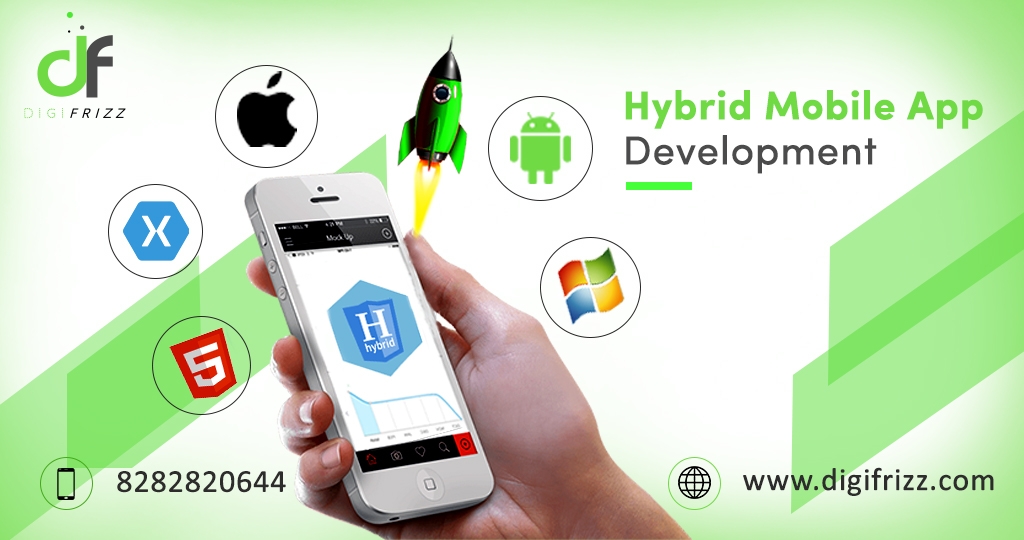 Hybrid apps possess elements from native apps installed in a device just like any other app. Hybrid apps open on the internet via a browser, acting like apps not installed. Hybrid apps use web languages such as HTML, CSS, HTML5, JavaScript, etc. Hybrid Apps offers functionalities within a web view.

Browser component with the HTML rendering engine.
JavaScript engine runs in full-screen mode with the mobile.

Hybrid app pages are asynchronously on-demand with multiple pages. The page-layout defines navigations, gestures, and transitions.
User interaction enhances page functionality with drag and drop widgets based on HTML and Bootstrap responsive design. Specific functions such as a Camera and Barcode scanner can access device capabilities.

Testing of the App gives you a preview of the Responsive Web App, but you will not be able to access any device-specific features included in the app.

Think for a minute and revise how many times you use an app in a day? Multiple times, isn’t it? An application is waiting in your play store for every human need. Mobile application languages are the future of technology, increasing at lightning speed.

React Native is one of the most important frameworks for both Android and iOS developers. It allows mobile developers to build high-performance apps with faster deployment times.

It is an open-source framework created by Facebook. It uses React and JavaScript languages that use a single code base for iOS and Android. React Native provides native views, text, images mapped to the native UI building block.

Flutter is a UI toolkit developed by Google. The framework provides widget customization to build native interfaces within no time. It works on one codebase that uses cross platforms for Android and iOS applications. You can create a powerful and expressive UI for the applications with a built-in material design widget. Flutter gives commendable features such as scrolling, navigation, icons, plus fonts, etc., to both engineers and end-users. The layered

Mobile Angular UI offers an attractive UI based on Bootstrap and Angular framework. It supports fastclick.js and overthrow.js to provide rich user interfaces. The automatic code handling of JavaScript supports cross-browser compatibility for each

browser. It provides overlays, component switches, sidebars, scrollable areas, absolute positioned top and bottom navbars. The key feature is that it allows the transformation of an already prepared web application to a mobile application.

Ionic was developed in 2013 and uses web languages like HTML, CSS & JavaScript. The main feature of Ionic is templates. You can utilize the designs with default UI components such as forms, filters, action sheets, list views, tab bars, and navigation menus. It also has built-in features such as Ionic Native, Cordova Based packages, etc.

Adobe PhoneGap was purchased in 2011 by Adobe Systems. It uses programming languages such as HTML5, CSS3 & JavaScript. The framework allows you to build cross-platform applications installed as a native app and do not depend on hardware configurations.

Appcelerator Titanium allows the developers to create native apps on Android, iOS, and Windows from a single Javascript codebase. You can use custom APIs for error-free integration. The open-source development framework allows reusability of up to 90% of JavaScript code. Appcelerator is connected with the cloud to use the code anywhere and anytime. 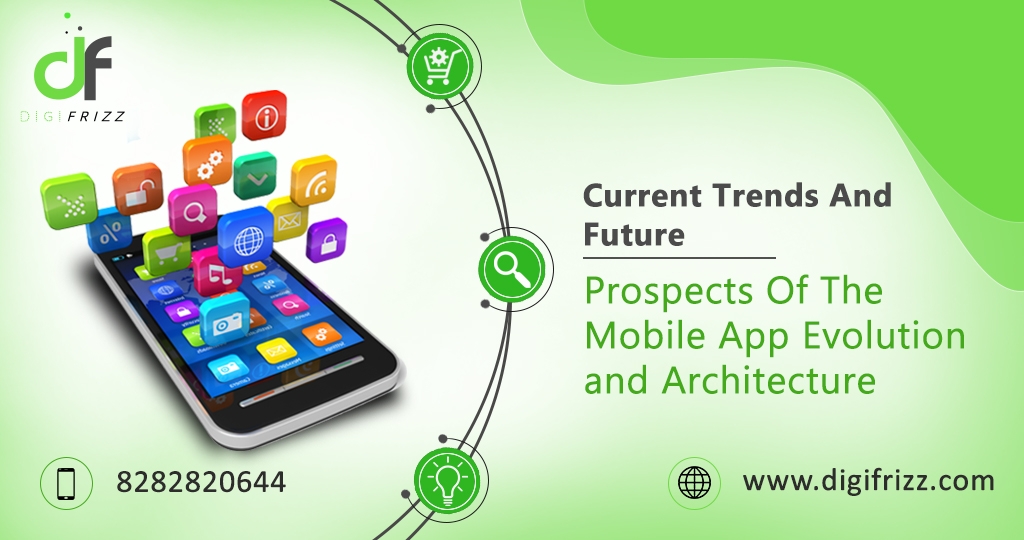 Mobile app development is growing faster than a beanstalk. The mobile world is growing at the speed of light. The number of mobile apps has reached new heights. The population of mobile developers has boomed.

In-app purchases and In-app ads in hybrid monetization models are gaining popularity. Most researchers believe that mobile app development is to be the future in the upcoming years.

Let us have an insight into mobile app development:

It is crucial to have a mobile app for your business because 90% of the global population has a mobile device. According to 2020 statistics, over 500 million people are using mobile devices across India. Mobiles are the trending medium for all the users across the internet. Every company and organization has to advance their business by mobile app development.

The exciting future of mobile apps will have browser-based applications. It will have a cellular network having a faster loading capacity. Some of the free accessible tools help with mobile app development in minutes.

The era of Apps: Latest App Development Trends in 2021:

The mobile app development trends have already penetrated the grassroots that delivers great functionalities in the future.

Artificial Intelligence and Machine learning go hand in hand. Applying artificial intelligence to mobile app development involves analytical ability. In E-commerce apps, machine learning allows the apps to make personalized recommendations according to the data. Since technology is continuously evolving, user needs will have a better delivery without conducting analytics and research.

One of the leading trends in 2021 is IoT. Guidelines are issued to focus mobile app development focusing solely on IoT. IoT displays smart technology potential. It helps to understand the application on sensors, web apps, and B2B apps. It also covers cloud technology making a convenient app development process. This sector shows plenty of continuous growth with increased momentum.

The business has accepted blockchain technology as a powerful tool for virtual wallet transactions. Its association with cryptocurrency technology has influenced mobile app development. It has benefits in the domain of security and manufacturing as well. Blockchain enhances security levels to improve the tracking of financial transactions.

The popularity of wearable tech is rising. The medical and fitness healthcare applications provide vital information within an arm’s reach. The innovations achieved through wearable app integration serve as the key to the technology. App developers like Uber and Apple are focusing on smartwatches and regular updates.

The fresh trend of on-demand service apps has skyrocketed in the current pandemic situation. This trending technology is a boon to all the users who want specific services quickly. Brands can respond promptly to the requirements. The on-demand services are popular with the entertainment and food industry. In the entertainment sector, users can immediately watch TV or web series regardless of place and time. Other sectors are still integrating this technology with robust growth.

AR and VR are the game-changers in mobile app development. VR and AR already dominate the app and play store with the immense satisfaction of the people. The developers will continue to open the windows of creativity and imagination with the respective changes in technology.

Chatbots integrated with machine learning show better user engagement. Retention achieved with the development of sophisticated chatbots is vital for any app. Users tend to quit the app once it fails to provide the necessary information. Chatbots resolve this issue by responding to queries quickly.

Mobile wallets have made stock market trading and investing very convenient for every individual. Plenty of apps allows individuals and businesses to lend money or store the currencies in any format better for foreign exchange rates. Mobile Wallet technology interconnected with wearables makes smartwatches a viable replacement for credit cards. The sky could not be a limit on technology.
The developing trends of mobile apps are successful only because of various framework methodologies in mobile app development. 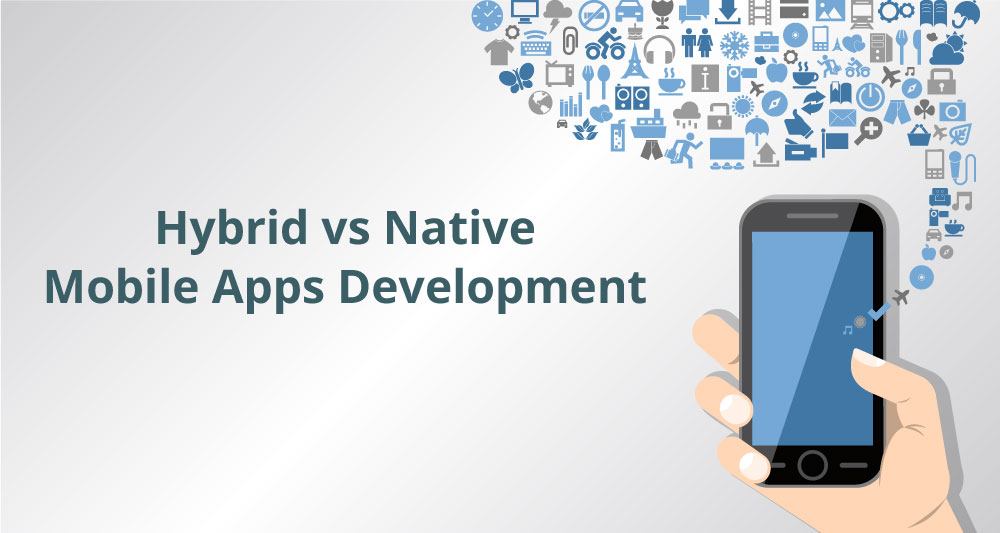 In Today’s modern time mobile is the most engaging gadget we use everyday. Research shows that almost everyday 4 hrs is spent by people on using mobile. So we can imagine that how important is mobile app right now to consumers. Most of the eCommerce brand gets much more orders from mobile apps than through website. So making an app in mobile is not a secondary now-a-days, its required. Then the debate comes what technology we will use developing the mobile app. Here i am briefing some important points that we all keep in mind while choosing a Technology.

Hybrid mobile apps are those apps which are built in technologies like ionic, Phonegap , etc. They are basically a website wrapped in a native container which can connect the phone underlying hardware. Here are some advantages of it:

We had looked some advantages of Hybrid App. Lets have a look at some disadvantages now

Native apps are those apps which are built on the platform that are given or built by the owners of respective mobile os companies like android and ios. For Android we use Java and for IOS we use swift. Both have their respective IDE for android its Android Studio and for IOS is Xcode. Lets discuss some advantages of it:

Lets look at the disadvantages of Native Apps :

So we saw the advantages and disadvantages of both technologies . We Digifrizz Tecnnolies LLP develop both type of Apps but our recommendation to client is always native. It is because it feels more like an app than a website and user experience is far more superior.

So contact us  Today for free evaluation of your business need for mobile apps and we are happy to serve you.